Šilutė nursery-kindergarten “Žvaigždutė” was established on the 1st September, 1972 and it started to operate on the 1st December, 1972. From 1972 to 1982 three principles worked in the organisation: Jūratė Pranulienė, Jadvyga Verikienė, Svetlana Čeikauskienė. The organisation had 12 groups, 280 children and 68 staff members.         Since  the 1st October, 1982, Stasė Viršilienė has been the head of the institution. Changes of principles pre-conditioned changes of staff members. Competent staff members willing to improve their competencies remained in the kindergarten. Changes started in 1985-1989: patrons were assigned to the organisation, they included the head of “Šilutė Roads Board“ E. Lisauskas and the head of “District Construction Organisation” A. Balčytis. Their efforts resulted in a great support to organisation, including 3 apartments for pedagogues with 2 of them of a dormitory type. Repair works were performed: the yard basement was demolished and a new building with a garage and a carpentry workshop was constructed. Two corpuses of the kindergarten were connected. A hall and a gym were set in the new building. In the internal yard a swimming pool and a greenhouse were set.         Until 1995 Šilutė nurery-kindergarten “Žvaigždutė” was subordinate to Šilutė Municipality, but afterwards the governing agency changed to Šilutė District Municipality and the kindergarten started to perform economic and financial activities as an independent organization. A car for delivering food and household goods was provided to the kindergarten and the position of a driver was established.         In 1996 Šilutė District Municipality Board endorsed artistic education in the kindergarten. The kindergarten organised exhibitions, activity presentations in the District and the whole Republic. The publication “Artistic education in the nursery-kindergarten “Žvaigždutė“ was released. Pedagogues got together in creative groups: artistic, informational, communication with families and preparation for school. Some of them have been currently functioning. Their experience was summarised in the publication “Activities of creative groups” in 1999.         In 2002-2003 pre-primary education model was launched. Academic education grew into creative complex education. Pre-primary Education Consultation Centre was established in the kindergarten and new methodology publication “On the way to pre-primary education” was released. Since 2005 we have been participating in the international programme for educating social skills “Zippy’s friends”. Pre-school education programme “Childhood steps” was launched in 2007. Since 2010 there have been 11 groups (3 nursery, 6 kindergarten and 2 pre-primary groups. In the same year the Methodology Centre was established with the European Union financial support (interactive whiteboard, computer equipment). In 2011 Family School aimed at 1-3 years old children who hadn’t attended the kindergarten yet and their parents was established. Activities are focused on family education, preparation to attending kindergarten and decreasing the issues of adaptation. The publication “Family School” was released. In 2013 the kindergarten participated in the national competition “Innovative models for organizing pre-school education” and funds were allocated for the project “Summer without worries”. In 2010-2015 the first renovation stage was implemented: insulation of the heating, plumbing system, walls and roof was carried out.         In 2015-2017 the kindergarten renovation was completed: insulation of the building was performed, the playgrounds for groups including outdoor ones were repaired, and furniture was purchased.

Šilutė nursery-kindergarten “Žvaigždutė” is a consistent self-developed community with a vivid cultural life; it is open to innovation and is not afraid of changes. 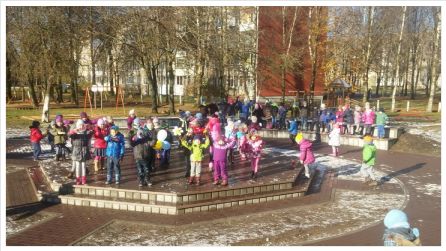 Šilutė nursery-kindergarten “Žvaigždutė” is a consistent self-developed community with a vivid cultural life; it is open to innovation and is not afraid of changes.

Šilutė nursery-kindergarten “Žvaigždutė” (The Star) is a typical pre-school institution. It was established in 1972; currently, 205 children attend it; there are 11 groups – 3 nursery, 6  kindergarten and 2 pre-primary groups.

Activities are focused on implementation of education policies and the strategic plan of Šilutė District Municipality. The institution develops programmes and publishes articles in press. The following information publications have been published: “Artistic education in nursery-kindergarten “Žvaigždutė“, “On the way of  pre-primary education”, “Creative groups’ activities”, and etc.

General pre-primary education and self-education programme with the goal to educate active, confident and believing in their own skills children with a strong learning motivation, to create conditions for successful future education by supporting child’s personality development.

Life skills learning programme with the goal to prepare children for life beyond school and in the future for adulthood in a quickly changing society.

Pre-primary children group participates in the international programme “Zippy’s friends”. Its goal is to achieve good emotional well-being of children, to facilitate acquisition of skills for overcoming social and emotional problems.

The following centres are available in nursery-kindergarten:

Consultation Centre for pre-primary  education. Its goal is to inform parents and pedagogues about organization of pre-primary education and to assist new pedagogues who start working in the pre-primary education group. Family School.         Its goal is to create conditions for children who haven’t attended kindergarten yet to communicate with peers in a new environment, to get acquainted with future tutors and to inform parents about pre-school education.         In nursery-kindergarten there is an information system that ensures timely dissemination of relevant information. Educational and information publications for parents are available, e.g. – “Creative groups activities in nursery-kindergarten “Žvaigždutė“,“On the way of pre-primary education”, Artistic education in nursery-kindergarten “Žvaigždutė“”, information booklets – “Activities of the Consultation Centre for Pre-primary Education”, “Advice to parents whose children start attending a nursery ”, “What makes children aggressive”, “Nursery-kindergarten “Žvaigždutė“, “Family School”, and etc.         The community is actively involved in implementation of partnership projects: “Bringing community together for the benefit of the child”, “Let’s create the outdoor environment of nursery-kindergarten together”, “If you get used to live a healthy and safe life, you won’t lose this habit in adulthood”, “Safe on the streets, on the road and in the yard”; projects for civil national education: “Small citizen in the whirl of national events”, “With roots in the ground and branches to the sky”, etc. All these activities are focused on bringing the organisation community together, to create a good micro-climate, while the results are used to improve the organisation’s performance.